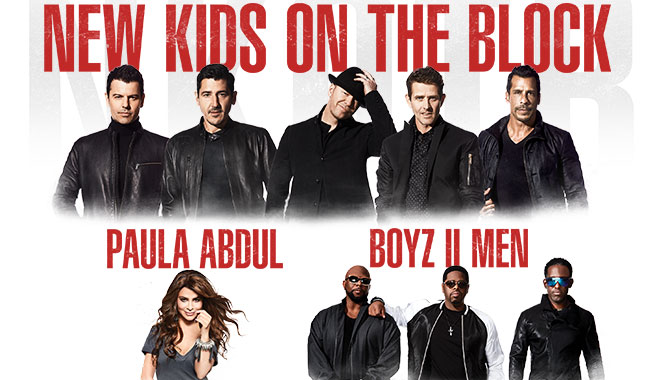 Posted on May 11, 2017 in Luxury Car Transportation

It’s the total package, all right! If you were born anywhere around 1980, you probably went through a time in your life where you were obsessed with New Kids On The Block, Boyz II Men, or Paula Abdul. Or maybe even all of them! If so, you can throw a party—all three of these superstar musical acts are hitting the road for the sensational summer Total Package Tour! Be still, 90s teen hearts!

This is particularly special news, as it’s Paula’s first tour in 25 years. New Kid Donnie Wahlberg says, “Our fans know we love to bring them a party, and this tour is no exception. It’s not just a show—it’s an experience. Paula Abdul is such a pop icon, and Boyz II Men are one of the best R&B acts of all time.”

Kicking off May 12 in Columbus, Ohio and finishing up in Hollywood, Florida on July 16, the Total Package Tour will be coming to the Hollywood Bowl on Friday June 2, 2107.

New Kids On The Block began in 1984 and caused nationwide hysteria amongst teenagers. They remain an extremely high-selling act. Boyz II Men emerged right on the heels on New Kids On The Block in 1985, and found major success in 1992 with their hit “End of the Road”. The two groups have toured together before, but never with Paula Abdul. Paula herself is a music icon who had hit after hit in the late 1980s, and whose first album went multi-platinum.

Seeing New Kids On The Block, Paula Abdul, and Boyz II Men all together in one show will be a dream come true for many fans. Can you imagine rolling up to this dream of a concert in a classic stretch limo? At Modern Limo Service in L.A., driving concert-goers to an incredible night of music is our specialty. We are proud to provide excellent car service and professional drivers with outstanding customer service who will get you to your show in style.

And if you’d rather take an SUV or a luxury sedan, we offer those vehicles as well. We even a Mercedes Sprinter if you want to go as a group with friends.

Check out a show promo:

Take a look at our fleet of available car service vehicles, and please feel free to contact us with any questions. You can also get an instant quote here. We hope you get to see the sure-to-be-amazing Total Package Tour at the Hollywood Bowl!